Neither a near-fatal auto accident in 1967, nor a debilitating stroke 23 years later could stop Gene from living his life and pursuing his dreams.

“I want to live in a community where everyone has a chance to improve,” says Gene Kuntz, who not only speaks these words but lives them.

Gene’s is one of those stories that can’t be repeated too many times—that of a person who will not give up in the face of adversity.

Gene has had more than his share of challenges in life. While still in college in 1967, he was involved in an automobile accident that left his throat crushed. Twenty-three years later, in 1990, when he was the general manager of an investment firm, the scar tissue in his throat collapsed, blocking his carotid artery and cutting off the blood supply to his brain. The stroke caused neurological damage that left him 100% disabled.

Gene could very easily have retired from life at this point and spent the rest of his years on disability. “But that’s not my personality,” he says. Wanting to support himself and continue to live a productive life, he returned to school and by January 1992 he had earned his Master’s Degree from Antioch University. He became a licensed family therapist after that, and went into private practice, which he continues to this day.

The stroke left Gene’s left side semi-paralyzed and affected his motor skills as well. He must walk with the aid of a cane and ordinary tasks that for most of us are automatic are for him difficult, to say the least. “I need help getting my suspenders on,” he observes with a smile, and observes that he greatly regrets being unable to hold his grandchildren.

The neurological damage shows in other ways. Sequencing is difficult for him. “I might put my shoe on before a sock,” he says jokingly. Collating documents in the correct order is hard. But he has adapted, using techniques and strategies than enable him to function as he needs to.

Gene began teaching at Allan Hancock College in 2005. He enjoys communicating with his students and especially likes working with those who are not native English speakers. “I have a great respect for those who come here seeking a better life,” he says.

His hobby is working with wood. Using a lathe, he creates his own mechanical pencils and engraves them himself as well.

Gene plans to continue teaching and counseling. He works with children in foster care and with his wife of 18 years, Rose, operates a foster home for abandoned cats and dogs. He also hikes and has even climbed in the Swiss Alps. He takes pro bono clients whenever he can and wants to help those who have intellectual disabilities.

“It’s real easy to use a physical disability as an excuse,” he says, “but I don’t.”

Inspiring. There is no other word that describes Gene Kuntz. 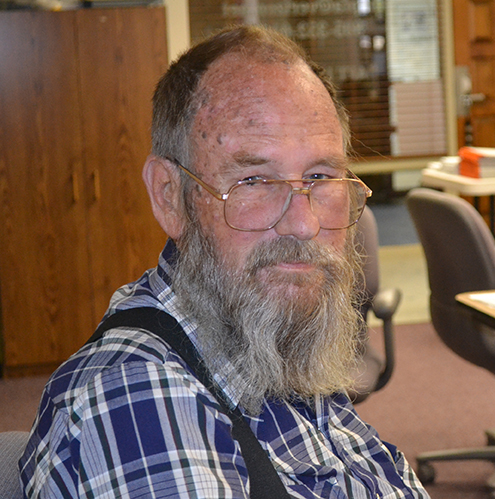